Modern serial fiction mark 1836 as birth of its genre. A Paris newspaper inserted sections of a novel each day to encourage people to buy a daily newspaper instead of the then weekly paper norm. Advancement in printing technology permitted affordable dailies by then.

Charles Dickens published his Pickwick Papers in English that same year. Daily purchases soared to 40,000 that same month. Many newspapers followed suit, signing up renowned authors to produces serial novels. The popularity of serial fiction in daily papers led to at least two riots in 1841 and 1842, respectively in New York harbor and in Paris by readers anxious to learn an outcome.

I did not set out to write serial fiction, but circumstance is such, that I realized after the fact that some of my fiction is serial, in parts. It began, unplanned, with my first two novels, Hawk Dancer and Cloudburst. Here is how that happened:

I wrote the short story, The Cure, as an advance creative writing assignment. The peer review and encouragement by my professor went straight to my head. The class wanted to know more about the terminally ill orphaned, (obviously cured as the title suggests.) Apparently, stories about polite, cute little orphans still grab at our hearts. The professor said he could see the story becoming a Christmas tradition. It has, in its own limited circles.

[Note: You can click most pictures to see an enlargement.] 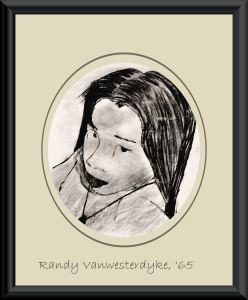 I set to work providing a history for the adults in the story years before the child literally crashed into their lives during a major snow blizzard. As well, what would become of this adorable, sweet, vulnerable boy? There must be twists and turns, but overall, please let it be that he grows up well. (Randy does, I am happy to report, and many readers can attest.)

Sections were sent to an uncle and aunt for proof reading. As first, we simply developed the characters and story. We figured a loose-leaf binder would be made when finished and that would be the end of that. Still, we decided it would be worthwhile to investigate how to get our hobby story published.

A publisher was found, but we realized we had to trim the novel down, like remove around 200 pages or more. The sections cut, and story ideas that came after the original edition of Hawk Dancer, 519 pages, served to produce a companion novel, Cloudburst.

I specify ‘companion novel’ instead of part two or serial because Cloudburst overlaps the Hawk Dancer period. The first novel opened in 1934 and closed in 1978. Cloudburst opened in 1964 and closes in 2010, thus the overlap.

(There is very brief notation at the end of Hawk Dancer that tells where major characters were in 2001. Otherwise, that first novel ends with 1978.)

Most early readers asked if there would be a third novel. I did not see that as practical. A number of cinematic sequels, in my opinion, were slipslop attempts to cash in on the excellent original. Rare is the movie sequel of equitable merit with the first, and less so a third or fourth movie. The same can be said of many novels. I was not about to slide downward when I feel we succeeded in making two companion novel, a sequel by default.

Starting with my illustrator of the novels, Kathy Johnson, others said they wanted to know more about favored characters. What about Dean’s mother? What became of the baby-boomer characters once they graduated from high school or college?

The third book was an anthology of short stories and poetry I wrote, mostly with North Country themes while building The Cure into the novel, Hawk Dancer. That now defunct and out of print book was titled Birch Clump Portfolio. My relationship with the original published soured and I decided to go with Lulu.com publishing. I revised both novels that are now available as second editions. The portfolio was divided between the first two BC Village Readers. That way I could still present the other writings and at the same time fulfill the desire to tell more about various characters from the novels without having to produce a third novel sequel.

Emerald Rising is the first of the Birch Clump Village Readers. About half the material from the portfolio is included. As well, I present the first of new material on Hawk Dancer characters that readers have asked me write. My first genuine serial is in Emerald Rising. Amos Crow, protagonist, is featured in the short story Fishing Hole, (part one) ending in a cliffhanger.

Left to die in “Fishing Hole” part one

Amos is, for all practical purposes, a new character. He is in the background of one scene in the novels; unnamed in the original edition and name given in the second edition. I begin developing his character with The Fishing Hole short story serial. That story ends as a cliffhanger. I was not sure what to do with him at the end. Thieves left him gaged and tied up in the forest. They tied his wrists so tight behind his back that he may as well be in a bear trap. Hands and fingers have gone utterly numb from lack of blood circulation in the closing cliffhanging scene. Getting loose was horrifically unlikely.

So, did he die of exposure to the elements and starvation? His predicament could render him prime bear bait. If a search party can find him at all, will he be alive or dead, and if the former, in what condition?

The second Birch Clump Village Reader (Fritha,) carries the other half of my earlier short stories and poems. I include some new stories on earlier characters. I backtrack to the humorous events surrounding the day Amos Crow was born,  but a part two on Fishing Hole waited for my third BCVR Reader.

Neil is in for the shock of his life when he unlocks the back door of the BC General Store, 1971.

Peanut Butter and Pickle Pie: Birch Clump Village Reader, 3 contains Fishing Hole, Part Two. Amos’ empty kayak was found down river on the third or fourth day of the town’s search. Details on Amos was not given in part two, just speculation surrounding the empty kayak and that three of Amos’ friends were highly suspected as having done Amos in.

It is the fourth BCVR Reader that revealed his whereabouts, and what his condition is, (alive, badly off, ok – considering his predicament, or dead.) I will not give out the spoiler in this newsletter.

I have yet to reveal exactly who the perpetrators are, motive or other details after they left him helpless in the woods in a secluded place most (if anyone) would know to begin searching for him or his remains. The who-done-it and how they are found out will be in still developing episode(s) for (a) future Birch Clump Village Reader(s).

Douglas arrives in Birch Clump. He’s searching the source and meaning of his name. What is the “T” in T. Douglas?

Ten Things: Birch Clump Village reader 4, not only concludes the major mystery of what became of Amos Crow, but a second serial begins. This will be a far less dangerous three part serial on what the “T” in Sgt. T. Douglas stands for.

His first initial had been used since I published Hawk Dancer in 2004. He plays a bit part in every book since. Now, after ten years of writing (or 63 years since his birth), readers can learn what the “T” stands for, its meaning, and how he got the mysterious and seemingly exotic name. Hint: According to the dictionary, ‘exotic’ has to do with foreign, imported, and not native nor domestic. With that in mind, I claim his bizarre sounding name is not exotic.

Douglas finally takes a starring role in the short story, Changing a Flat. A spark of romance is in incorporated as the aggressively flirtatious Nora falls for him. T. Douglas is looking for his biological father who gave him that awful name* in that story.

[*The phrase, ‘gave him that awful name,’ is taken from Johnny Cash’s song, A boy Named Sue. He does not roll around in the mud, and the blood and the beer, as in the song, but an analogous challenge is issued in a somewhat comical manner.]

Douglas’ story surrounding that strange first name is continued in the latest publication, What Would Bubba Do: Birch Clump Village Reader 5. He stars in the short story, Confession of a Chicken, (part one and part two.)

He is laid back, a great listener, and gentleperson in the Novels and short stories. In viewing his Face Book page, on the other hand, he comes across impulsive and egotistic, but still loveable. As the author, I would like to say his gentle, quiet demeanor and gentle ways in the books is the real Sarge. The Face Book doppelgänger of his wildly ways is just for fun, and does not reflect the true and sensible Sarge T. Douglas in my books.

Bubba was a name I simply liked and used for fun. There was no character actually appearing in my books named Bubba until I wrote the 5th BCVR Reader.

There are actually six BC Village Readers, but I purposely did not apply a volume number to the seasonal Christmas Surprise: A Birch Clump Village Reader (using “a” instead of a number.)

Most short stories have not been written with chronology in mind. Collectively they could be considered a fiction serial, though not in the same vein as my treatment of Fishing Hole and Changing a Flat.

We know from the end briefing in Hawk Dancer that Dean was married and had children and a grandchild on the way was of 2001. Serial updates on his life since 1978 and leading to 2001 have been published or are in the works. The same can be said about Trudy, Erik, Jig Rajan, Randy and John, Clelia and others including the amusing and delightful “Flo Thompson,” Dean’s mother.